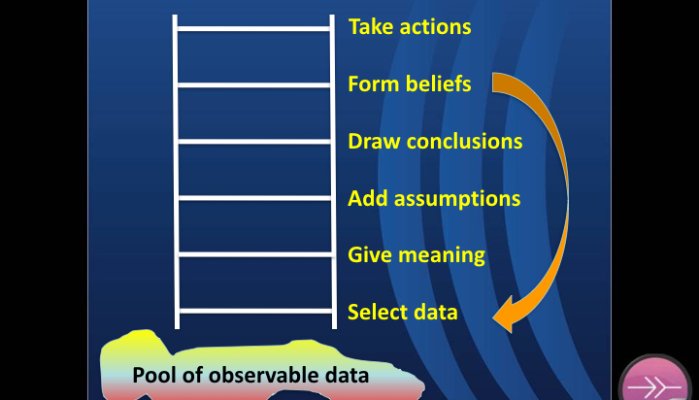 Described in his book ‘Overcoming Organisational Defences’, Chris Argyris’ model, the Ladder of Inference, attempts to articulate how people move from a fact to a decision or action. As humans cannot possibly process all the data available to them, we first select some of it and then apply all manner of meaning, assumption and conclusion before forming a belief and possibly taking an action. No one knows precisely why each of us should select one piece of data over another, and therefore the reflexive loop where we carefully select more data in order to prop up the beliefs we have previously formed, is equally personal. For me, it echoes Douglas Adams’ observation that “human beings, who are almost unique in having the ability to learn from the experience of others, are also remarkable for their apparent disinclination to do so.”

I have avoided the current debate about whether or not the United Kingdom should or shouldn’t remain a part of the European Union. Actually, I haven’t; there just hasn’t been one. Debates tend to exist in the spaces where people are willing to explain the reasons behind their choice of data and then clarify the meaning they give it and the conclusions they draw from it. In the absence of this, little persuasion is possible and so the current conversation is nothing more than the verbal sparring of opposing beliefs.

The daily headline generator of “Brexit will/won’t cause + superlative + noun”  has been a tedious Punch and Judy performance put on by a media who continue to harvest the riches brought by salacious speculation. This is ably supported by politicians of all persuasions jostling for power through fear-mongering, mudslinging and posturing. And then finally, judging by the streams of social media that I have followed, we the masses have a tendency to present our opinions as facts, label the other side as simpletons who know nothing and then retreat behind our keyboards.

I have absolutely no idea of whether or not the United Kingdom would be better off in or out of the European Union after June 23rd. But as no one can agree on what ‘better off’ means, I’m not so sure that it’s really about that. However I have a vote, and this referendum feels far more important and far-reaching than any other I have had a stake in.

I have neither the political understanding nor the time in which to create it in order to make a truly informed decision. In addition to this, I have enough experience of working with economists to be fairly certain that getting them to agree on an economic forecast for either outcome is unlikely. As I am unable to reach a decision using expertise, whether mine or someone else’s, I must base my decision on far more personal criteria.

I am a naturalised immigrant from outside the European Union who is married to an immigrant from inside it. We have children who were born and are being raised here, and I choose not to deny them the same opportunities that were available to us.

My decision-making process may be flawed, but it is one I am happy to live with and I am always open to persuasion.