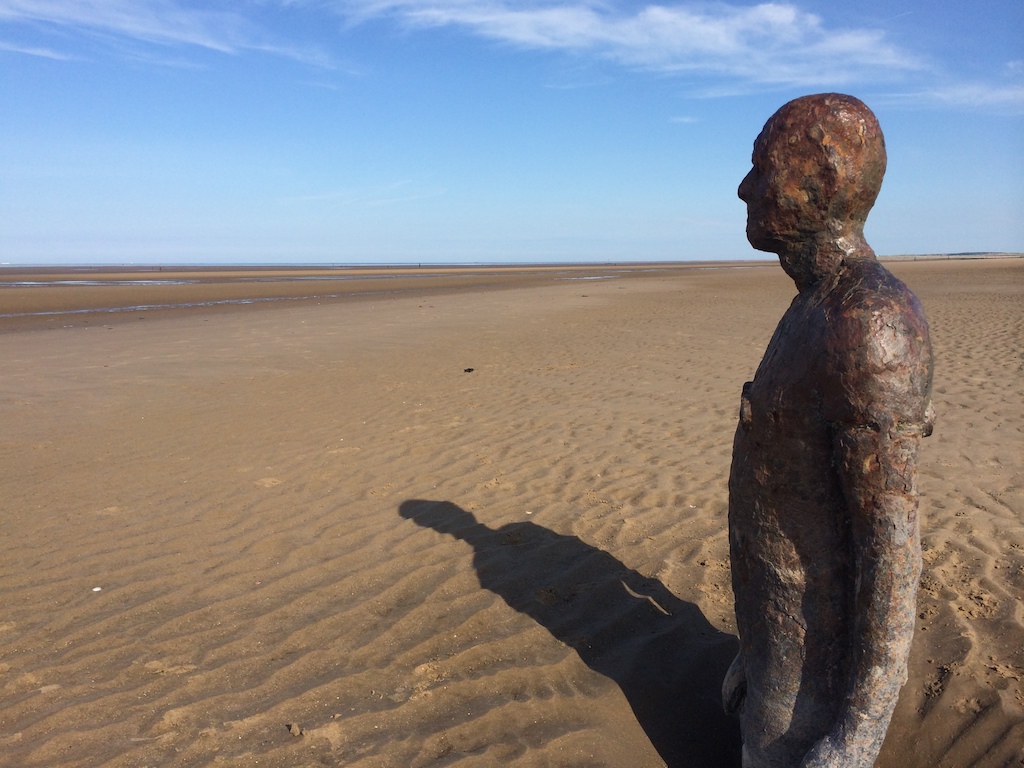 Holidaying in Malta some twenty five years ago, I had fallen in with a group of fifteen or so other solitary travellers from various parts of the world. We all did our own thing by day, but usually spent evenings sprawled around a number of poolside tables filled with more bottles than plates, discussing and sometimes arguing about a range of topics from the mundane to the arcane. Unsurprisingly tempers were sometimes piqued, and one of the two vivid memories I have from that trip was sharing a point of view that a swarthy chap from Lincolnshire clearly took exception to. “Wait, are you foreign?”, he asked me ominously. I couldn’t help but reply with a grin “yes, but from where we are sitting, I’m about a thousand miles less foreign than you.” Given the lateness of the hour and the fact that I then had to explain my answer before he understood my point, nothing was established other than the fact that discretion is the better part of valour. The second memory I have from that trip is from a week later on New Year’s Eve, when I arrived back at my hotel after a long day spent walking along the coast. As I crossed the lobby, I heard my name being called from the bar, urging me to join the rest of the group already in place at our usual spot. The voice belonged to a tall affable chap and as I approached, he opened his arms wide in welcome. I responded by giving him a big hug, planting a kiss on his cheek and shouting “Happy New Year’s Eve!” He recoiled as though stung by a wasp, the smile evaporating from his face as his right fist connected with my jaw. These events didn’t surprise me then and wouldn’t do so now, but they are among the oh-so-many moments in my life that have fuelled my fascination with cultural differences in general, nationality in particular and how luck is so often presented as personal achievement.

About five months ago, I received an invitation from a client to create an interactive session for a large and diverse group of researchers designed to help them better connect and communicate amongst themselves. “Have a look at this book”, she suggested, “it’s something I recommend to everyone in our department, and I think you might find it interesting. If you can incorporate any ideas from it in your workshop, that would be brilliant.” With these words, I was introduced to what I now refer to as the book I have been waiting my whole life to read: The Culture Map by Erin Meyer, who is an American professor who teaches in Paris at INSEAD, a global graduate business school. She has travelled extensively, lived in various countries and through her work helps people navigate the complexities of cultural differences. In order to be effective, she suggests that it is not enough to simply be aware of and accept that cultural barriers exist in the world; we have to do something to mitigate the impact they can have, and this starts with accepting that our own cultures have just as clear a character as all the others that we marvel at and sometimes find difficult to navigate.

The Culture Map is the tool that she has created to help us understand our place in the multicultural world better, and the framework for it is as a set of eight scales, with each one being a continuum along which a country can be positioned according to how people who live there seem to do things. As you might imagine, all countries contain huge variations of behaviour between their individuals, subcultures and regions, and over many years she has gathered an enormous amount of data from her students, experiences and experiments. Creating clarity by sacrificing accuracy, she has used the median point from each dataset to create a representation for a country on each of the eight scales, which are designed to reflect the way we communicate, evaluate critically, lead others, make decisions, build trust, disagree, regard schedules and build arguments for the purpose of persuading. The clearest understanding of these will come from reading her book, as it is filled with countless stories, strategies and insights, but below I have briefly outlined them so as to give you an idea. 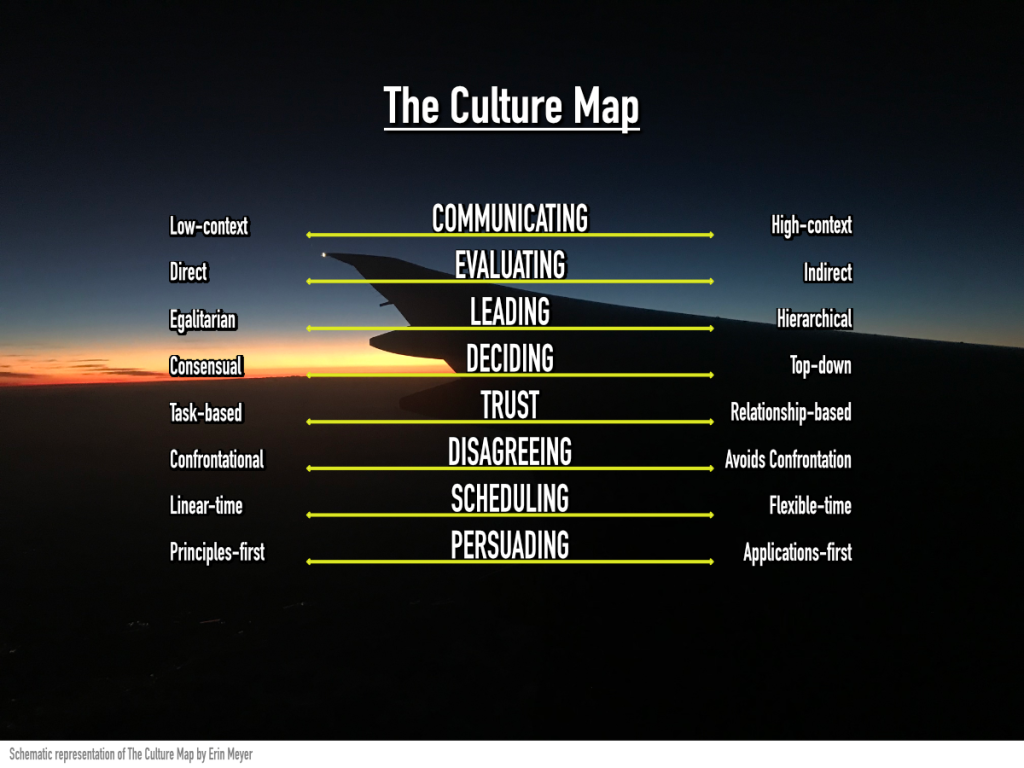 Spread across these scales, Erin Meyer uses all the data she has gathered over the years to produce a Culture Map – a visual representation of how these eight things are typically done – for approximately fifty countries around the world. Through these lenses we can explore and compare cultural differences, and if we add to it an increased awareness of the character of our own culture, her work then becomes a tool which can offer ideas about how we might flex our behaviours so as to navigate the particular landscape in which we find ourselves most effectively.

Critical to interpreting these maps is the concept of Cultural Relativity; the idea that a country’s actual position on a particular scale matters far less than its relative position to others. If we consider just one of the scales as an example: the United Kingdom has a culture of communicating that is higher-context when compared to America, but someone from Japan, placed at the far right of this scale, would likely perceive both cultures as lower-context relative to themselves, and therefore might be less able to distinguish the differences between them than someone from a country like Germany, which is located higher than America but lower than the UK. After all, we only recognise water as cold when we have experienced what comes out of the hot tap.

As I mentioned earlier, all countries have large variations in all eight scales, and so we as individuals would rightly assert that no median point could ever represent us. Available through her website, Erin Meyer allows us to create an account and then take a questionnaire for a nominal fee which reflects the personal culture we think best represents us arranged on the same scale. We might then use it to explore how well we “fit in” with the country in which we live. Or perhaps we might use it when considering the culture of a country which we want to visit, work in or even live in. I have found it incredibly useful and insightful when thinking about the times I have worked in places like Egypt, Canada and Brazil and from now on I will certainly refer to it when making any travel plans.

The reason that I describe this as the book I have been waiting my whole life to read is that among the principles that underpin her work, Erin Meyer states that cultural differences can exist within us. As someone who was born in the US and raised mostly in the UK with a German mother and an Italian father, I have always felt a bit “neither here nor there” and this idea caught my attention straight away. The image below represents the relative positions (slightly adjusted for clarity) of these cultural influences in my life, with my personal map superimposed on top. Make of it what you will; my wife, who is Swedish, certainly has. 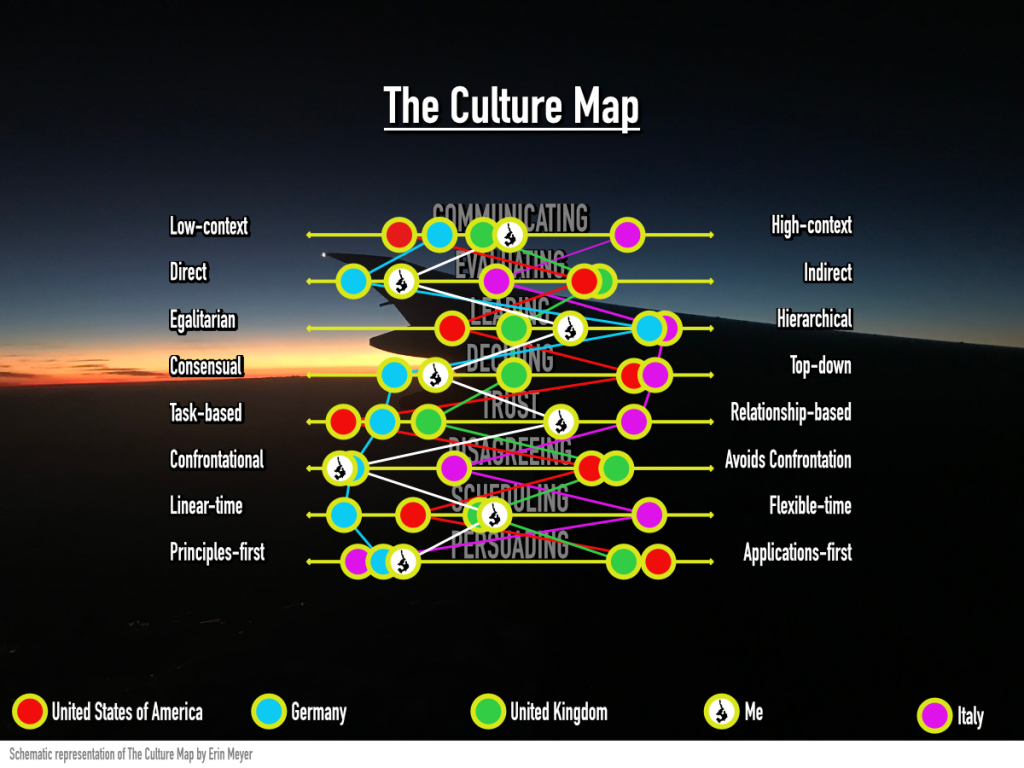 Of course, this map doesn’t prove anything and I’m not sure how it fits with the nature/nurture debate, but it does resonate, shed light and provoke useful conversations in my head. It helps me explore the similarities I have with the cultures of where I live and where my work takes me, it suggests how the cultural differences within me can conspire to cause certain issues, and it might explain why I sometimes feel as though I don’t fit in anywhere. It also provides a thoughtful tapestry against which the beautiful words of Ijeoma Umebinyuo in her poem “Diaspora Blues” can be viewed.

“So here you are

too foreign for here

too foreign for home

never enough for both.”

Cultural differences will always be barriers that need to be recognised, addressed and overcome if we are to integrate beyond our immediate borders, and not just tolerate but openly accommodate, welcome and celebrate others. If nothing else Erin Meyer’s book gently warns against exceptionalism by showing all cultures to be equally distinct and sometimes difficult for others to deal with. Isolationism of one form or another has been tried by various countries through the ages, but it’s never stood the test of time. Sir Peter Ustinov once wrote that beliefs are what divide people while doubt unites them, and so it is that curiosity always wins in the end.

I’ve started to develop a new course based on this work to add to my existing portfolio, but if there ever was a book designed to be taken on holiday and read from the depths of a sun lounger while other languages, different customs and all manner of the unfamiliar swirl around you, this surely is it.