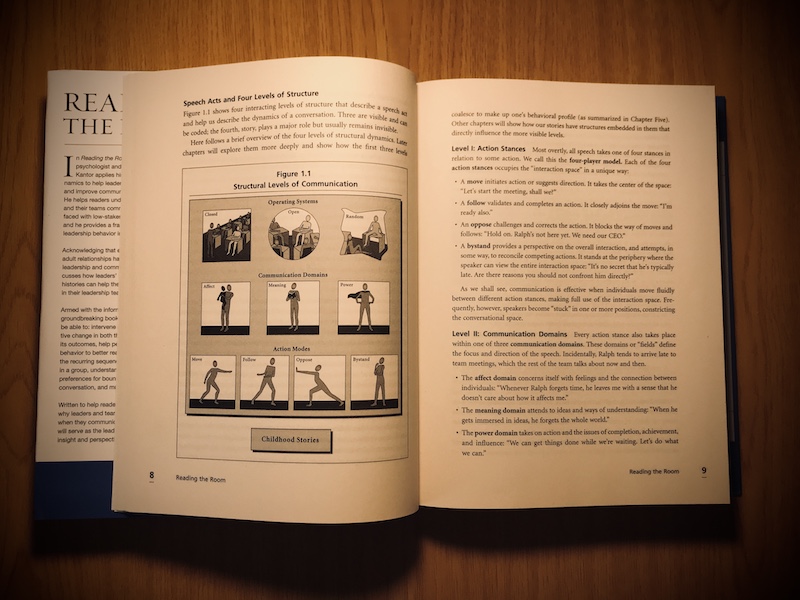 One of the more useful frameworks that I refer to in my work is the four-player model, part of the theory of structural dynamics created by David Kantor, an American systems psychologist, whose work was first inspired during the 1960’s when family therapy began to focus on treating the family as a system instead of the individual as a patient. It suggests there are only four acts, or roles, that we can use in vocal communication. We can move, that is to say we can initiate by saying something like “shall we go for a meal?” We can follow, which brings completion by agreeing “that’s a great idea, let’s go!” We can oppose through offering some form of correction perhaps by saying “actually I’m not hungry, why don’t we go for a walk instead?” The fourth and most important role is that of the Bystander, who adds perspective to what is going on and often bridges any differences between others. Kantor suggests that communication problems can occur when individuals become ‘stuck’ in using only one of the roles, or when certain combined sequences become entrenched within groups.

Now facing our third general election in four years thanks to the resolutely indefinable and elusive Brexit, the deluge of political ranting that we have been weathering for over three years is set to increase yet further in intensity, although probably not in clarity. The campaign officially gets under way today, and this one already promises to be not just underhand and snide but overtly dishonest and desperate. Political parties will spend the next five weeks relentlessly ingratiating themselves with as many of the electorate as they can in an effort to win, and this requires that they willingly put themselves up for our scrutiny. But rather than engage in any kind of purposeful dialogue, politicians will just pick one convenient aspect of the truth and robotically repeat it at the expense of all the others. As a result, we are likely to be treated to many more exchanges like the one between Susanna Reid and Health Secretary Matt Hancock on Good Morning Britain last Wednesday, during which he blankly refused to answer her questions, blinked and issued rigid scripted statements instead.

Matt: We’re going to deliver 20,000 more police to make sure that we tackle crime

Susanna: That does’t even cover the cuts, Mr Hancock.

Susanna: No, sorry, we won’t even have as many police officers as you cut.

Matt: We’re going to have more police on our streets as I say.

With both of them adopting the role of the mover, it was a game of endurance rather like watching a lacklustre rally at a tennis match where both players continually play the same shot over and over again, ending only when one of them simply can’t be bothered to return the ball. It always makes for frustrating viewing and sits at or near the heart of the accusation levelled towards politicians that they are continually evasive and dishonest, and you may remember how hard Jeremy Paxman once tried unsuccessfully to get an answer out of the then Home Secretary Michael Howard in 1997. Of course, Mr Hancock could choose to adopt the role of follower and answer the questions put to him, but as politics is primarily a game of bluster and sophistry this is unlikely. In Westminster, politicians adopt the roles of mover and opposer only, and this is determined literally by which side of the House of Commons they sit on, the ensuing conflict turned into an utterly pointless pantomime by the odious tradition of jeering, taunting and bovine lowing that seems to be a permanent soundtrack to all that passes for debate in the chamber. That aside, mathematics have rarely mattered more than they do now, and so it’s probably high time that this particular hung parliament was drawn and quartered as well.

As a population that delegates governing to its parliament, we naturally play the role of the follower. Unfortunately we have been fairly consistently and evenly split on the single most important national issue of the day, which is mirrored accurately in parliament. This causes a huge problem for those attempting to move, as every initiative is met with just enough opposers to prove that you can only lead if enough people follow you. Hence the plaintive wail that a 3.8% winning margin is actually the “will of the people” habitually cracks before any paint is applied to the narrative, let alone given time to dry. With both sides firmly entrenched in their positions and showing no signs of movement, we watch helplessly as motions, votes, bills, exit days and general elections take place with monotonous regularity, not a one so far allowing us to confront the inconvenient truth that we, as a country, are not as one.

Thankfully none of this is a problem as we live in the information age, and the purpose of our mainstream and social media is to play the role of Bystander and provide the overall perspective, context and understanding that we need in order to educate and inform ourselves fully. Or rather it would be were it not for the former being mostly owned by billionaires with agendas and the latter specifically designed to create personalised echo chambers that seduce advertisers, mask their underhand tactics and maximise revenue. Whatever topic you choose, the heady output of catchy headlines, misleading articles and dishonest adverts will not falter until the legal cost of telling lies outweighs the profit it makes. This failure has played a crucial role in cementing our confirmation bias and we are now in more need than ever of thinking critically for ourselves, especially as a noticeable percentage of us wish neither to be informed nor enfranchised.

David Kantor argues that in a system where the Bystander role is disabled, dysfunctional or muted, the mover and follower are free to eliminate the opposer, and we might do well to remember that the last time this happened on a significant scale, the US banks took excessive speculative risks and pushed their economy, and by association ours too, over the edge of a cliff. So, apart from taking delight in the welcome return to prominence of the art of satire, perhaps we should also take some comfort from the fact that a relatively recent addition to our news programmes is that of the reality check correspondent.