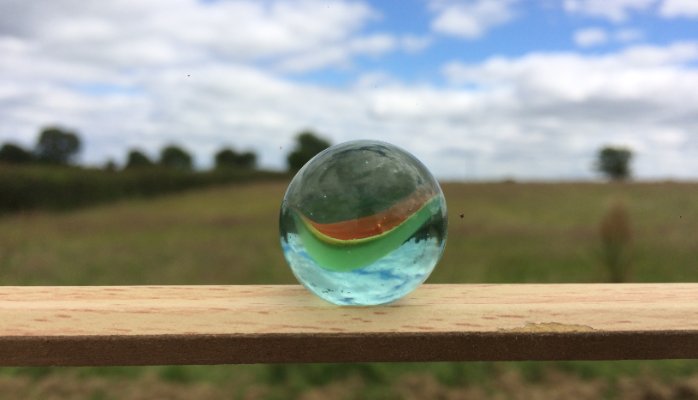 At work I sometimes use an exercise called ‘Marble Run’. It asks a group of about eight people to transfer a marble from a start line some fifty metres or so to a cup by letting it roll along eight short sections of hand-held track. The rules are that once started the marble must not stop, the person holding the piece of track it is on must stand still while it passes and the marble must remain in contact with the track at all times. The exercise requires planning, coordination, precision, some nimble footwork and is incredibly difficult to do, as the marble has a tendency to roll back and forth; the track invariably being held by excited and unsteady hands. “If the marble rolls backwards it has, by definition, passed through a moment of stillness” is what I tell groups as their initial attempts fail and their hopeful spirit vies with a growing sense of frustration for control of the outcome.

Public moaning about the government of the day is a national pastime in any democracy. It’s safe, fun, everyone can play and if things get too heated we can always pull the plug using the caveat that it was our elected representatives who made a pig’s ear of things. There is no such pressure relief valve with the recent UK referendum about EU membership, as it was an exercise in Direct Democracy the likes of which we will probably not see again for quite some time. We were given a straightforward choice, and we voted without knowing too much about either outcome.

As a result, we now seem to have a society split along idealogical lines and there is no buffer between our vote and its impact. It’s like banging your head into a brick wall, except it’s not a wall; it’s somebody else’s forehead. The winners are telling the losers to ‘get over it’, ‘just be positive’ and ‘stop having a tantrum’ and the losers are screaming ‘it’s not fair’, ‘my future has been stolen’ and ‘it was all lies’. None of these responses are very helpful and you don’t know what you don’t know until you find out, and we are now finding out very quickly how much that really is. If you take a balanced view, it’s a bit of a mess as leaving the EU probably won’t deliver enough of what Leave voters demand, and the eventual compromise is unlikely to make Remain voters happy.  It may be that the abstainers are the only ones who, perhaps unwittingly, did the sensible thing in realising that most of us are not qualified to make a decision of this complexity and magnitude.

Then there are the disenfranchised young, many of whom seem indignant and bewildered, and the 3.3 million* EU immigrants currently living in the UK who had no say. The rudderless remains of the government, predictably denied any answers from Brussels until they actually put their money where their mouth is, didn’t hesitate to use the latter as bargaining chips in a game of political chicken by casting them adrift in no-man’s land while they scrabble around devising the plan that no one had thought to make beforehand. Unfortunately, experience clearly shows that the EU takes a long time to do anything, and as that includes flinching, it is unlikely that this problem will be resolved any time soon.

“Oh, but you’re not an immigrant”, “I didn’t mean people like you“ and “You’re alright, it’s the other ones I’m worried about!” are all direct quotes that have been said to my face in the last fortnight. However well-intentioned but misguided these comments may be, there is no such thing as being ‘a little bit pregnant’, and if you try to separate me from someone who arrived here last month, you deny me my history and look a bit silly in the process. So while the architects of the status quo in the shape of Cameron, Farage and Johnson jump ship and presumably head off to join the lucrative lecture circuit, they leave a foul legacy in which millions of people are now living from day to day waiting to discover if and possibly when they will have to give up their homes, quit their jobs, say goodbye to their friends and leave.

My hunch is that over time the government will discover more than a little truth in the old adage that says many lovers who try to remain good friends after a split are either still in love or never were, but if they expect continued benefits it can’t help but reveal a quality of their character.

Now, no matter how busy I make myself, life feels very different to how it did a fortnight ago, and so I wonder whether my wife and I have just passed through another moment of stillness on our marble run and find ourselves once again a little unsure about which direction we are travelling.