In a second year project at drama school many years ago, I struggled with Jean Genet’s The Balcony*, a play so strange that my fellow drama students and I never actually worked out if it was set in a revolution or in a brothel, both of which were suggested but neither definitively stated in the script. I had the part of Bishop, a gas fitter who went to the brothel to get his kicks from dressing up in full episcopal regalia and absolving a prostitute pretending to seek forgiveness. For six weeks I found myself wearing garish makeup and long flowing robes under a three-foot mitre with five-foot shoulders and two-foot tall buskins strapped to my shoes. If that weren’t enough, I also adopted a simpering upper-class accent which made me sound like Brian Sewell and Jacob Rees-Mogg’s love child, and delivered most of my lines from a throne whilst sweat made my mascara, rouge and eyeliner run down my cheeks. This excerpt from the script has always stayed with me:

“I swear I have never, never aspired to the episcopal throne. To become a bishop… would have meant my becoming further and further removed from the ultimate dignity of being a bishop. Let me explain: if I had wanted to become a bishop, I should have had to put all my energy not into being one, but into acting in the sort of way that would have led to my becoming one.”

My understanding of Genet’s text: that the effort of becoming something is a waste of the resources that could be better deployed in perfecting the image of it, for me, explains so much about the presidential style of Donald Trump. I have a clear memory, although I cannot track down the video evidence for it, of a televised meeting at the White House right after a Christmas break where he started the proceedings by ignoring his cabinet, focussing on the press and announcing “Welcome back to the show!” He often refers to his voters as fans and is demonstrably more concerned with how he and his family appear on television, than any service the revolving door of his administration may actually deliver.

In order to appear qualified for the job, he has developed a studiously rehearsed commander-in-chief pose in which he draws down the corners of his mouth and stares into the middle distance to effect a look suggesting a preoccupation with weighty affairs of state. Signing presidential orders is a momentous act made so melodramatic that operating a pen often requires his whole right arm instead of just his hand, his head ceremoniously wobbling with the occasion. Sometimes he becomes so engrossed in his own performance that he totally forgets that someone else is involved and may have a contribution to make too. Endlessly obsessing about how best to parade his importance in-front of an audience with a photo-op, he is perfectly qualified to appear more presidential than most and never tires of promoting himself to anyone who will listen, even if that’s only himself.

Comically and tragically, his Achilles’ Heel is a desperate need to be liked covered by the thinnest of skins which he is utterly unable to manage or mitigate. To play to a packed gallery is a natural forte for him, but to be then concerned with the size of it renders him the punchline of a bad joke. He praises only those who defer to him and displays incredible petulance when not getting his way. Personal slights affect him so much that it can even influence international policy, and he has a reflexive urge to spite those whose words belittle him. So concerned is he with presidential optics that there is little time or bandwidth left for the actual duties of his office which he dispenses, as all bullies do, like an utter coward.

The man has all the subtlety of a wrecking ball, has clearly never had to clear up after himself, is unable to articulate an idea clearly unless guided by an autocue, is a case study in narcissism and seems possessed of little congruent, logical or nuanced thought. Utterly impervious to shame, he foists his family upon the global stage in what appears to be an attempt not to drain the swamp but to acquire it for his property portfolio, and any dynasty he creates will most likely be in the mould of one from a television soap opera which ages and fades as soon as the oxygen of publicity runs out. 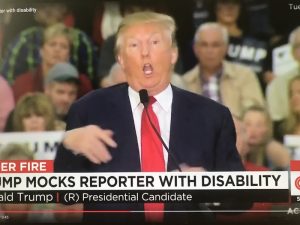 A vanishing point is the furthest point in a view that allows us to create the perception of three dimensions where only two are used. It underpins an artistic technique that can be used to great effect, as I found when visiting the Cathedral of the Assumption in Gozo some twenty years ago. The problem is that it only works from one position, and moving from that spot reveals its deception. I remember thinking it strange that the architect had chosen not to build a domed cathedral, yet wanted visitors to think, even if only momentarily, that he had.

Now, on this side of the Atlantic, it is all but confirmed that we too will be led by a morally bankrupt celebrity who, like the architect Lorenzo Gafà did with the design of his cathedral on Gozo in 1697, uses tricks to create the illusion of depth. Boris Johnson has the intellect to understand the complexities of politics, but seems averse to the hard work of mastering a brief and shows little consideration for the impact of his mistakes. He deploys bluster and buffoonery to mask his lazy dog-whistle politics. He uses a bumbling schoolboy act to deliver outright lies through a giggle, knowing that even if he’s forced to retract them, his arrows will have hit their mark and the damage will be done. As a journalist he admitted enjoying the sound of breaking glass after throwing stones at his neighbour’s greenhouse, and influenced the UK’s perception of the EU as a result of it. But as a politician the cost of being careless and cavalier can be significantly more, as Nazanin Zaghari-Ratcliffe and Sir Kim Darroch know.

Nonetheless he is a consummate performer able to deliver a speech where each and every fumbled hesitation, quick glance and off-the-cuff quip appear improvised but absolutely aren’t. Much of Johnson’s schtick seems to have been inspired by the late Bob Monkhouse, who once noted that “The public love sincerity. And if you can fake that, you’ve got it made.” He clearly can, but it’s only skin deep and it takes a fellow journalist to spot the scaffolding behind the facade and another to reveal how flimsy it is.

Both Johnson and Trump belie whatever political ability they may have by serving their own interests in a murky swamp of deceit, and have been able to persuade their supporters that their lack of moral compass is a price worth paying. I sometimes wonder if their undisguised mutual admiration is based on nothing more than the fact that each has what the other wants. Johnson, with his elite Eton and Oxford background lusts for the demagogic power that Trump, still doe-eyed from the pomp and pageantry of a British state visit, has. The famed special relationship has turned into a bit of a kinky bromance, I guess. 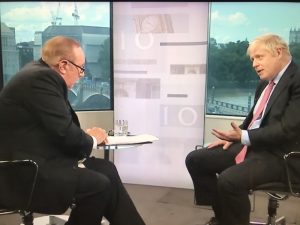 But for now their tricks work which has given permission for others to do the same, and the rot has spread remarkably quickly. Selective amnesia increasingly afflicts the parliaments of both countries now, and in the last few weeks we have had instances where a politician wagged her finger and threatened a libel action against a reporter’s accusations of shady activities, which was shortly followed by the release of audio recordings which proved her deceit. There was also an episode where another politician, when challenged about the fact that her parliamentary voting record bore more resemblance to a wind sock on a gusty day than anything remotely driven by conviction or a consistency, said without a hint of embarrassment “Well, it’s poker, isn’t it?”

Don’t get me wrong, none of this is new; politicians have always lied and always will. But the aroma of the 1930’s, which we thought we’d never see again, has returned with the same fear and normalisation of vile behaviour. It’s therefore absolutely no surprise that some of the xenophobia that has only been muttered for as long as I can remember, is now yelled from the rooftops. Vision has gone, detail is dead and decisions are a popularity contest where, in true television style, points mean prizes. Take back control and make America great again are totally meaningless soundbites, and until such time as everyone can agree on what precise course of action they actually refer to, we the people will remain the weakest link and our leaders will cloak their self-interest and greed with a trompe-l’œil depicting service, sincerity and integrity. Unfortunately the illusion only seems real if viewed from the exact position of blind faith, and suddenly Maya Angelou’s words seem to echo Jean Genet’s with perhaps a more ominous tone than she intended.

*The photo featured with this post is of the characters Elyane and the General from a public production of The Balcony in 1997 at the Arts Educational Schools, reproduced here with the kind permission of Jo Harris and Tor Wibe, who played the parts.