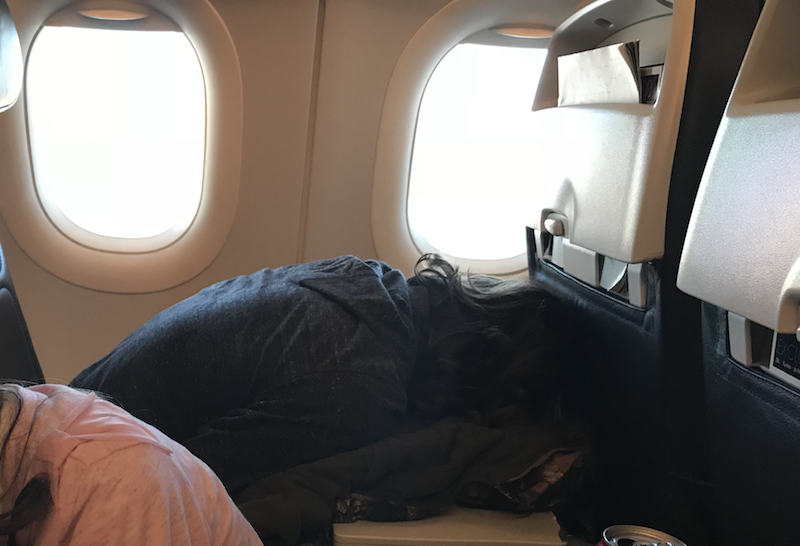 I travel frequently by plane, and apart from the obvious problems of air travel like delays and spending long periods of time in confined spaces, I mostly enjoy relying on someone else to schedule my time for a short while. If I have been lucky and secured a window or aisle seat, I am grateful if no one sits next to me. If I am less lucky, and am destined to share the experience with another at close quarters, I then pray for a travelling companion who is average sized at most, affable and hygienic. If I am really unlucky and get the middle seat in a row of three, then I comfort myself with imaginings of being flanked by a pair of nymphomaniacal mile-high club members of the female persuasion.

Many years ago, after finishing a week’s work for a client in Amsterdam, I headed to Schipol Airport for my flight back to Heathrow. It was an unremarkable day, and I was looking forward to going home. I checked in, and then headed off to explore the delights of duty-free. It was only when I had to produce my boarding card during a purchase that I saw my seat was “18B”. My heart sank at the prospect of my seat’s location, and then lifted at the faint possibility of spending a 45 minute flight sandwiched between Claudia Schiffer and friend.

On hearing the final call for my flight, I approached the gate and boarded. Proceeding up the aisle, I reached the eighteenth row and looked down. In the window seat was what could only be described as a pile of clothes that you would normally see left in the doorway of a charity shop. In the aisle seat was someone who looked the size and shape of a typical sumo wrestler. In between was my seat, and after the appropriate amount of apologies and awkward contortions I was firmly wedged in place. The pile of clothes to my left wriggled once, farted and then lay motionless for the entire flight. To my right, the sumo wrestler was firmly focussed on his work, and fidgeted constantly. Throughout the trip he and I played what I can only call “armrest hockey”; that childish game that people often play where they try to preserve a large amount of personal space at the expense of others. (Some teenagers on the London Underground are particularly good at this, sitting as they often do with their bottoms as far forward on the seat as possible and their legs as wide open as they dare.) Sumo and I didn’t make eye contact, exchange a word or acknowledge each other; after all, this was war.

Forty five minutes later we landed and began taxiing to the terminal. As we bumped over the tarmac, passengers began collecting their belongings from their seat pockets, turning on their mobile phones and preparing for the mad dash to customs and baggage reclaim. The plane came to a halt rather abruptly and the pilot informed us over the intercom that he had turned into the wrong gate. This would mean a delay of about twenty minutes as we had to wait for a tug to come and push the plane around. Quite naturally there was an audible chorus of groans from the passengers to this news, and Sumo and I made eye contact for the first time in order to raise our eyebrows and sigh in resignation.

We started talking. First about delays and how useless the pilot was, but then about work, about travelling and about ourselves. As we talked, a curious thing happened. We began to accomodate each other, removing our elbows from the barbed wire of no-man’s land and engaging each other in a polite, interesting and interested conversation. It only lasted until we reached the gate about fifteen minutes later, but it was long enough for me to realise that perhaps if we had made the effort at the start of the flight it would have been more enjoyable for both of us. As we shook hands and said goodbye, I promised myself that I would not let something like this happen again.

On leaving the plane, it transpired that the pile of clothes was a very sleepy and disarmingly attractive young dutch woman. Start with the end in mind indeed.