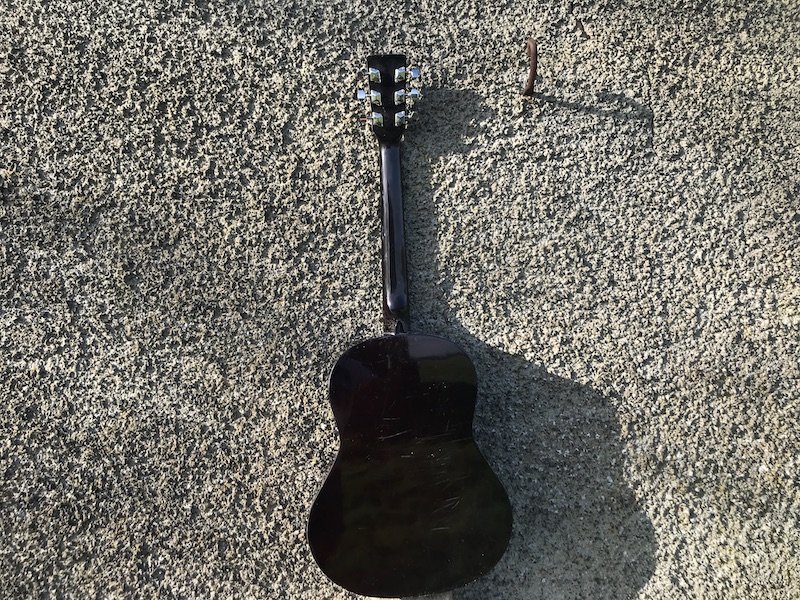 The soundtrack to the summer of 1985 was, without a doubt, Dire Straits’ fifth album Brothers in Arms. Dominating the airwaves and selling well over 30 million copies around the world, it brought the Compact Disc and digital music into the mainstream, used cutting edge animation for some of its promotional videos and spawned five hit singles. On a gruelling tour lasting twelve months that started in April that year, the band played 248 concerts in 23 countries, and on one day that October, I skipped school and made a six-hour road trip with friends to see them play at the Cumberland County Civic Centre in Portland, Maine.

Apart from being a brilliant concert, I also remember it for an incident during the encores when a fan standing near the front threw his sweat-drenched t-shirt towards the stage in excitement. It landed on Mark Knopfler’s guitar and interrupted the opening chords of Money for Nothing, the best-selling single from the album and the song that would become the band’s biggest commercial hit. The singer’s response was to stop, call out for the follow spot operators to capture the offender in their lights and invite all 6,000 of us in the auditorium to mock him. The band then went on to perform the song with Knopfler gesturing so as to suggest the now utterly humiliated fan was one of the song’s lead characters, even substituted the lyric “jet airplane” with “wet t-shirt” to underline his point.

It’s an insignificant episode from my teen years and of no consequence to anyone, but as communication and interaction fascinate me, I’ve always remembered how Knopfler’s response struck me as rather awkward at the time.

Thirty five years later my interpretation of it has gradually become more nuanced partly from my job, but also from my observations of him speaking about his work. To me, he has never seemed wholly comfortable with fame or the role of a rock star, preferring to be a musician and songwriter who perhaps stands a little in the shadow of his guitar. The comedian Rowan Atkinson, also a fan, described him in 1988 as a musician who writes wonderful tunes and then never sings them, preferring to let his guitar take the lead while he moans along in the background, as this recording of Private Investigations beautifully illustrates.

Fronted by someone who avoids and even shuns the spotlight, the end for Dire Straits came quietly and unsurprisingly in 1995. But he clearly still has things to say, as evidenced by his solo output of nine soundtracks, four collaborations and the contributions to 115 albums of other artists so far.

He mostly writes about characters that he observes or imagines, like the haunting If This is Goodbye, a duet with Emmylou Harris which was written from the perspective of someone trapped in the World Trade Centre on September 11th calling their loved one for the last time, and inspired by the countless voicemails that were left that day. It’s easy to understand the desire not to be the subject of one’s own work, but Anaïs Nin, the French-Cuban American diarist who once wrote that “we don’t see things as they are, we see them as we are”, prompts me to wonder if Communiqué, the title track from Dire Straits’ second album, was not actually far more autobiographical than he had perhaps intended.

“Right now, he’s saying nothing at all, but in the communiqué you know he’s going to come clean. Think what he say, say what he means, maybe on Monday he got something to say.”

If you are a fan of him or music generally, then you might enjoy the video above of him discussing guitars. If you aren’t, then you still might find it fascinating to watch a man who needs more than just the human voice to communicate effectively. I find it mesmerising to watch how, while explaining his technique, describing the qualities of his instruments and cataloguing the influences that have shaped his sound, he constantly and seamlessly transfers the narrative between himself and his guitar, as though a complete explanation is only possible using both instruments. Thinking back to the concert and his interaction with the irritating fan, I wonder if in that moment he felt unable to express his dissatisfaction using just his voice, and needed to communicate it through his music as well. Anyone who has endured the embarrassment of failing to make themselves understood in a foreign country and having no more resourceful a remedy than to stubbornly repeat themselves slower and louder, will appreciate only too well that it can help to have the option of a second language.

But nowhere is it written that you can only use words, so as Mark Knopfler says in the video, “If you get to the end of a vocal and you’ve got nothing more to say, maybe the guitar has.”