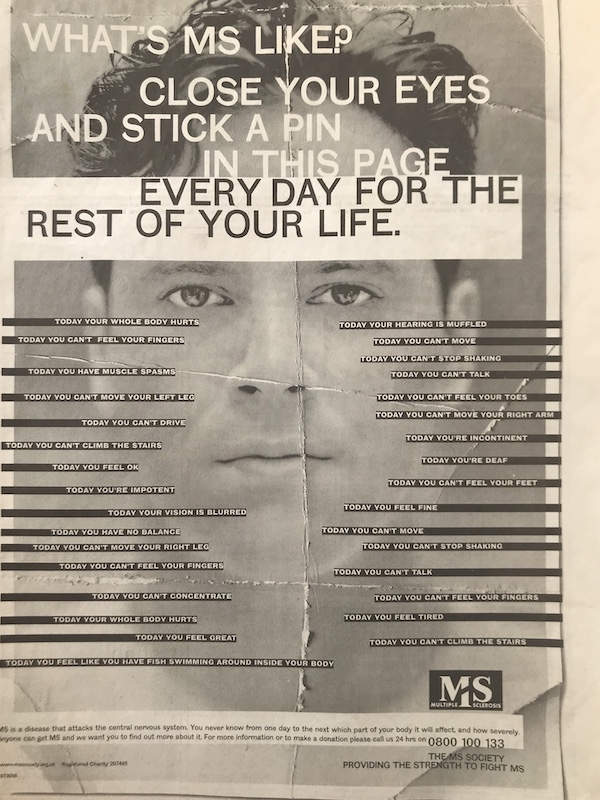 On the morning of May 2nd 1995, having had for six years infrequent but regular neurological episodes, I was diagnosed with Multiple Sclerosis in under two minutes. The doctor spent the entire consultation mumbling while hunting for something amongst the papers on his desk, and then offered me a leaflet as he steered me from his room. I had absolutely no idea what he had been talking about, but his offhand manner suggested to me that I had contracted some sort of mild viral infection that would probably clear up in a week or so, and I returned to drama school where the summer term had just started. I apologised for my late arrival to David*, my course director, and explained where I had been. He put his hands carefully on my shoulders, searched my eyes and asked if I wouldn’t be better off at home. Assuming he feared that I might cause some sort of flu-like outbreak, I agreed with his suggestion and left. I spent the rest of the day sitting on my window ledge with a few cold beers, slowly piecing together what had happened that morning and getting sozzled.

It struck me then as it still does now that if I asked almost anyone what might be a good way to tell someone they have a serious, chronic or life-threatening medical condition, they would give a broadly similar answer. They might suggest things like taking your time to answer any questions, feigning empathy even if you don’t feel it and expecting that someone on the receiving end of such news might be scared and need a little support. I’m equally sure that if I asked the neurologist who diagnosed me the same question he wouldn’t disagree, but he did none of those things and I don’t for one minute think he was anything less than a brilliant doctor with a full complement of normal faculties. And yet, for some reason, he was not able to access them in that awkward moment, and what should have been an engaging and purposeful conversation was never more than a staccato discharge of data that became memorable for all the wrong reasons.

It remains one of my life’s most glorious ironies that just weeks earlier I had finished performing in a drama school production of ‘The Destiny of Me’, directed by David, a play about a man with a chronic illness looking back over his life from a hospital bed while undergoing treatment for it. Several years later over a drink (it was always over a drink with David) he admitted to a mixture of regret and almost a sense of responsibility for having cast me in the part. I reassured him that, having been stripped of some of my naïveté by events, I had fallen out of love with acting, to which I was never particularly suited, and had developed instead a fascination with the extraordinary impact on a person’s resourcefulness that stepping into a spotlight can have. I’ll never forget the look on his face as I spoke; a mixture of wry amusement, palpable fondness and deep paternal care all combined in the satisfied smile that comes from a job well done in the end.

In early 1997 I was asked to model for a nationwide public awareness campaign for the MS Society. Immensely flattered, I immediately agreed and then spent a morning standing in a studio with my head inside a strange aluminium reflector and more styling wax in my hair than I ever knew was possible. While the photographer took what seemed like hundreds of shots, I remember feeling stiff with nerves and completely awkward. The production team must have been regretting their decision, but tactfully requested that I summon up whatever acting ability or screen presence I could. Dutifully I searched my mind for any nugget of drama training that might provide me with enough talent to last as long as the photographer’s shutter speed, but what kept popping into my head was a memory from late one evening during rehearsals for the play mentioned above. Getting to the end of a scene that clearly required a lot more work, David sighed from the depths of his chair, pushed his glasses up his nose with a mischievous smile and said in his unmistakeable voice “Oh go on then, show me your entrance one more time.” He promptly started giggling with his shoulders bouncing up and down, lit another cigarette and then said “Actually, I think we’re better off going to The Tabard, don’t you?”

The result of the photo shoot, which appeared on billboards and in broadsheets for a few months, may have helped raise public awareness of MS, but in reality it’s just a picture of me thinking about David, trying not to laugh and needing a pee. 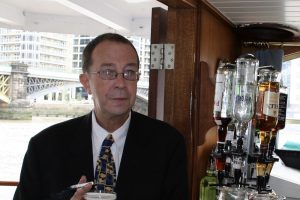 Dear David, you took your final curtain call a while ago now, but are remembered and still loved so much by me and many others. You often used to say that the past is another country, and I have learned that you were right about that too. It’s been twenty five years to the very day since you and Julian Dawes found me at the table on the landing at Arts Ed after that bizarre doctor’s appointment and gently dropped a pebble that I can never forget, the ripples from which will shape my children.

It’s probably the mixture of today’s date, my middle-age and Coronavirus that brings a memory like this so vividly back to the surface, but even if not I still maintain that I am grateful for my diagnosis. Obviously, being a coward, this might change rapidly and with little warning one day, but until it does let’s have a cheeky one for the road – and you can take the piss out of my singing one more time.

*The photo above shows David Robson (1944-2013) propping up the bar at my wedding in 2006 with a characteristic pint and ever-present St Moritz menthol cigarette in his hand.