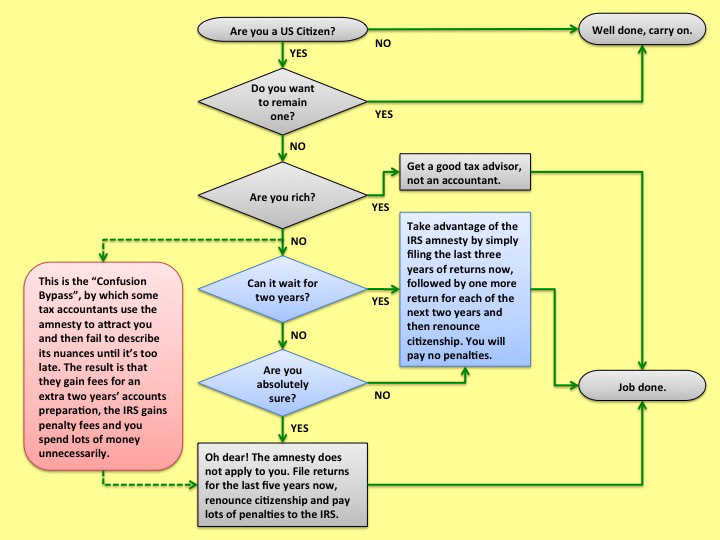 About a year ago I found out that I have been in breach of a US law that requires its émigrés to report their income and, if more than a certain amount, pay tax on it. Just to be clear, I’m talking about a law which forces Americans living abroad to pay domestic US income tax on their earnings over and above the income tax they already pay in the country where they live and work. It is the only country in the world that requires this of its citizens, and echoes beautifully my two-year-old daughter who, when eating her breakfast, points at my cereal bowl and says with her mouth full, “mine too!”

I earn less than the threshold at which tax would become payable, but in order to prove this I need to file a US tax return every year. This is a daunting prospect given its complexity, and the fines for getting it wrong are impressive. Available as a service from specialised accountants, it comes at quite a hefty price, but why I should be compelled to spend five hundred pounds every year to prove that I don’t owe any tax to a country that I don’t live in is beyond me. I’m just an Ordinary Joe, and I doubt very much that the US government has much in the way of records about me beyond my birth certificate and passport. Even if they did, tracking down a very small fish in a very big pond would certainly cost more than it would yield. It’s therefore possible and indeed probably likely that I could just keep  quiet, fly below the radar and nothing ever would happen.

Except now there is FATCA; the Foreign Account Tax Compliance Act which forces organisations around the world to fish, or rather trawl, for American money on behalf of the IRS in Washington DC. It’s stated aim is to prevent US residents from avoiding taxes by sending their money abroad, but as America can’t seem to spot where it ends and the rest of the world begins, there is a great deal of bycatch in its nets. Quite how it works is beyond me, because when my neighbour tells me I shouldn’t cut my shrubs I tell him to sod off and mind his own business, but when Mr Obama signed FATCA into law as a part of the Domestic Jobs Stimulus Bill in 2010, it became the very real problem of every American living abroad. It has thus far caused me problems with lawyers, accountants, estate agents and HMRC. So draconian is it, that high street banks would rather small fry like me took their business elsewhere, and are sending out letters to that effect. Dealing with Americans is increasingly time consuming for organisations in the UK and elsewhere, and it’s becoming easier just to avoid the problem. Who can blame them?

It has given me enough sleepless nights to make ignoring it impossible, and the final straw was finding out that US citizenship is a lot like like syphillis, and my children will not be saddled with future problems through some tenuous hereditary claim. I’ve been there and done that with another country already, and so I was left with no choice but to renounce my US citizenship.

The first thing I found out when I started the ball rolling is that you need to provide tax returns for the previous five years, so I gritted my teeth and paid a US tax specialist what turned out to be a four figure sum to produce staggering volumes of paperwork that I am fairly certain no one understands or will ever read. Then I found out that it’s not that simple because I work through a limited company, which is something I do as a freelancer to make life easier for me and those I work for. However, the IRS refuses to recognise that and bluntly considers that I own more than 10% of a ‘foreign entity’. As a result it feels entitled to help itself to a piece of not just me but my company as well.

So I paid one fortune to an accountant (who inspired the graphic above by being either completely out of his depth or incredibly self-serving), and a second one to the US treasury, and all this just to bring my records up to date so that I can renounce my citizenship, the fee for which was $30 in 2010. The cost has risen over the last four years by 422% to almost two and a half thousand dollars now, as the IRS greedily capitalises on the sudden stampede of Americans rushing to buy their freedom from the very same country that can’t stop talking about freedom. I duly bought some old rope for a third fortune, made an appointment at the US Embassy in London and lost a day’s work in order to take part in a theatrical charade. This involved waiting, repeating the same information that I had already submitted in various forms online, then waiting some more and, for my curtain call, I handed in my passport and stood reverently to attention with my right hand raised whilst reciting a paragraph of flowery language to a civil servant who clearly found the whole farce no less tedious than I.

I find it shameful that the US government first rapes the finances of its citizens who live abroad and who ask from it nothing, and then shrugs with rolled eyes, a giggle and a rather watery smile while Apple, Pfizer and seven hundred other US companies openly flout the express purpose of FATCA by exporting their homemade profits to the tax haven that is Dublin. All that remains on US soil is the foul stench of boardroom deals and backhanders. But bullies are always cowards, and as unpleasant as Leona Helmsley apparently was, I’m not entirely sure that she was imprisoned for tax evasion as the records state or actually for letting the cat out of the bag when she said “Only the little people pay taxes.” Either way, I don’t take kindly to people who steal food from my childrens’ mouths.

Now having paid a fourth fortune in penalties, thanks to the careful omissions of my vague and less-than-honest accountant (see diagram above), it brings the total amount lost through this foul pantomime to something over ten thousand dollars. So bye bye Miss American Pie; the levy is dry and the music has finally died.

You can keep the Chevy.

Since writing this, I have contacted no less than a further five US tax specialists requesting exactly the same advice with which I originally approached mine, and all of them withheld precisely the same information; that if you file five years’ returns at once in order to renounce immediately, the amnesty will not apply in full and you will face fines. If they had their clients’ best interests at heart, they would advise them to file three years immediately followed by a further two in due course, as you become legally compliant on filing your first return. This careful omission guarantees them the additional income from a further two years’ accounts to prepare and exposes you to IRS penalties for them. The one thing they almost certainly wouldn’t suggest is that you just file for the current year, continue for a further four and then renounce. But you could do just that; why file retrospective accounts at all? The amnesty is nothing but a lure used to build mountains out of the molehills.

Coincidentally, every specialist that I approached was on the US Government’s list of approved tax service providers. Make of that what you will.